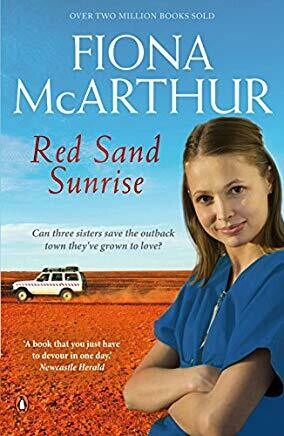 Three-pack of linked books. Standalone books but if you like to read an update on characters you've met before these three books are loosely linked. Read Red Sand Sunrise first. Followed by The Baby Doctor and then The Bush Telegraph including postage in Australia. Overseas POA.

From the internationally bestselling author Fiona McArthur comes a heartfelt story of family ties, the power of love and the passion of ordinary people achieving extraordinary things.
Red Sand Sunrise

From the internationally bestselling author Fiona McArthur comes a heartfelt story of family ties, the power of love and the passion of ordinary people achieving extraordinary things.
When the father she barely knew dies suddenly, midwife Eve Wilson decides she owes it to him to go to the funeral and meet her stepfamily in Red Sand. She doesn't expect to be so completely charmed by the beautiful remote township in far west Queensland – or by local station owner, Lex McKay.

After disappointment and heartbreak in Sydney, Dr Callie Wilson doesn't hesitate to move home and spend some time with her grieving mother. The chance to establish the area's first medical clinic seems a perfect opportunity, and Callie is keen to involve Eve, who she's just getting to know.

Melbourne-based obstetrician Sienna Wilson can't understand why anyone would want to bury themselves in the outback, but when her hospital sends her north to research the medical mystery affecting women in Red Sand, it seems fate is intent on bringing the three sisters together. And when disaster strikes, they must each decide if being true to themselves means being there for each other . . .

‘The right people turn up in your life at the right time if you let them.’

Sienna Wilson is living her dream in the city – a rewarding obstetrics job in a leading hospital, an apartment with a view, and handsome Sergeant McCabe on call whenever she needs him. The last thing she wants is a posting to a remote outback town to investigate a medical mystery.

But on arrival in Spinifex, Sienna is brought to life in new and exciting ways. In a community riddled with secrets, she meets troubled young barmaid Maddy, and tough publican Alma, both with their troubles to hide.

As they draw strength from each other, new friendships, new loves and new babies are born, proving that when strong women join forces, they can overcome even the greatest odds.

Praise for Fiona McArthur:
'I never miss one of Fiona McArthur's books.' Sam Still Reading
'An uplifting story of friendship and romance.' Book'd Out
'Whenever I feel like journeying to the ochre and brown glory of the outback with its special brand of people, I know Fiona McArthur will take me there ...' Book Muster Down Under

'Small towns and gossip go together like trees and birds.'It’s been more than ten years since Maddy Locke left Spinifex, the small outback town where she gave birth to her daughter, Bridget. Now she’s back to prove she’s got what it takes to run the medical centre and face the memories of that challenging time in her life. But everything’s changed – the old pub is gone, her new colleagues aren’t pleased to see her, and it’s drier and hotter than ever.

Station owner, Connor Fairhall, thought he’d left the drama behind in Sydney, but moving back to Spinifex with his rebellious son, Jayden, hasn’t been the fresh start he’d envisioned. His brother, Kyle, is drinking too much and the only bright spot on the horizon is meeting Nurse Maddy, who’s breathing new life into the weary town up the road, little by little.

Can Maddy ignore the rumours about Connor and risk her heart again? Or will the bush telegraph spread along the wire fences and stand in the way of trust?

Save this product for later